In a first-of-its-kind pact, the National Bobwhite Conservation Initiative (NBCI), the U.S. Forest Service (USFS), the Georgia Wildlife Resources Division and the South Carolina Department of Natural Resources have entered into a formal agreement to establish NBCI bobwhite focal areas in conjunction with national forests in the two states. The Forest Service’s national office set aside $100,000 to support the on-the-ground habitat restoration process on their lands. 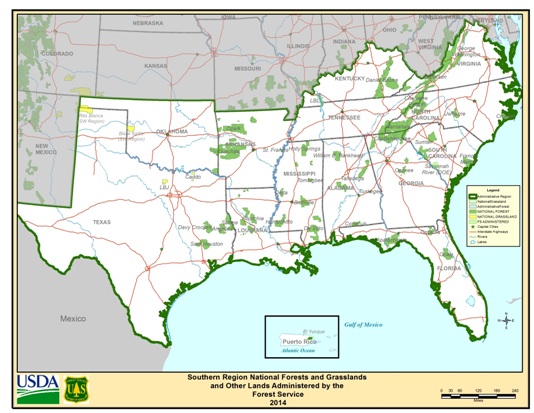 NBCI bobwhite focal areas comprise several thousand acres in an area that has been classified as “high” or “medium” priority in the context of the feasibility of habitat restoration achieving the predicted bobwhite population response to management. The intent is to create and manage suitable habitat on a sufficient enough scale that bobwhite coveys can survive over time and, in the process, clearly prove that habitat is the fundamental missing piece in declining bobwhite populations. In addition, the bobwhite habitat created also provides habitat for a number of declining priority songbirds, pollinators and other species.

The focal areas involve the Oconee Ranger District of the Chattahoochee-Oconee National Forest in Georgia (the Oconee Quail Focal Area) and the Enoree Ranger District in the Sumter National Forest in South Carolina (the Indian Creek Quail Focal Area). Mid-story hardwood removal on 200 acres of pine will be an emphasis with this new money in Georgia, as well as the development of a management plan for the area that may be used as a template for other national forest lands. Fire line construction for future prescribed burns and the seeding of those lines with native weeds and wildflowers will be the immediate focus in South Carolina.

“Active, purposeful management of pine forests to re-create the historic pine savanna ecosystem habitat in the Southeast is a fundamental NBCI strategy in recovering bobwhite populations,” said NBCI Director Don McKenzie. “Not only did these respective national forest personnel sign on to help, but we had the full support of the Forest Service Southern Region and national office as well. We are encouraged by this development, and hope it bodes well for additional agreements involving other national forests in states around the southern region, such as Alabama, Mississippi, Louisiana and Florida.”

“We are excited to be joining forces with USFS to expand the success of our partnership with NBCI in restoration of quail habitat to a focal area anchored on the Oconee National Forest,” said Mark Whitney, assistant director, Georgia Wildlife Resources Division. “Working in concert, we can accomplish habitat improvements for quail and other early successional plants and wildlife on a scale no single entity can hope to achieve alone.”

“The DNR and the U.S. Forest Service have had a strong partnership in South Carolina for a long time”, said SCDNR Director Alvin Taylor.  “We actually started work on the Indian Creek Area around 2004, and have recently designated it as one of our official NBCI Focal Areas.  The quail population has responded very positively to the habitat restoration work, and we are now also monitoring a suite of nongame birds and expect that they will show increases in abundance as well.”

Headquartered at the University of Tennessee Institute of Agriculture’s Department of Forestry, Wildlife and Fisheries, NBCI is an initiative of the National Bobwhite Technical Committee (NBTC) to elevate bobwhite quail recovery from an individual state-by-state proposition to a coordinated, range-wide leadership endeavor. The committee is comprised of representatives of 25 state wildlife agencies, various academic research institutions and private conservation organizations. Support for NBCI is provided by the Federal Aid in Wildlife Restoration Program, state wildlife agencies, the University of Tennessee and Park Cities Quail. For more information, please visit www.bringbackbobwhites.org and find us on Facebook, YouTube and Slideshare.

About the U.S. Forest Service

The mission of the U.S. Forest Service, part of the U.S. Department of Agriculture, is to sustain the health, diversity and productivity of the nation’s forests and grasslands to meet the needs of present and future generations. The agency manages 193 million acres of public land, provides assistance to state and private landowners, and maintains the largest forestry research organization in the world. Public lands managed by the Forest Service contribute more than $13 billion to the economy each year through visitor spending alone. Those same lands provide 20 percent of the nation’s clean water supply, a value estimated at $7.2 billion per year. The agency has either a direct or indirect role in stewardship of about 80 percent of the 850 million forested acres within the U.S., of which 100 million acres are urban forests where most Americans live.

The Georgia Department of Natural Resources (DNR) is comprised of six divisions which carry out DNR’s mission to sustain, enhance, protect and conserve Georgia’s natural, historic and cultural resources. As one of six divisions within DNR, the Wildlife Resources Division (WRD) is charged with conserving, enhancing and promoting Georgia’s wildlife resources, including game and nongame animals, fish and protected plants. WRD is comprised of three sections – Game Management, Fisheries Management, and Non-game Conservation.

The mission of the South Carolina Department of Natural Resources is to fulfill the public trust doctrine by serving as the principal advocate and steward of the state’s natural resources.