The Kentucky Department of Fish & Wildlife’s new five-year benchmark report on their 10-year bobwhite restoration plan is evidence that large-scale habitat restoration is not only possible, but it is the answer to the bobwhite decline and should be viewed as a  model, says National Bobwhite Conservation Initiative (NBCI) Director Don McKenzie. 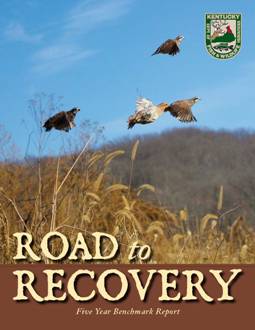 “Kentucky’s approach is what the states have agreed, through NBCI, is the appropriate approach to genuine wild bobwhite restoration on a landscape scale,” said McKenzie. “Prior failures in numerous states have been typified by small-scale efforts that lacked proper implementation, maintenance and connectivity. Bobwhites require larger-scale, continuing habitat efforts across multiple states to be successful long-term on America’s landscape.  Kentucky’s efforts reestablish native vegetation and replicate or mimic the way people managed that vegetation in earlier times when bobwhites were abundant. I would urge anyone interested in bobwhites — or the suite of songbirds or other wildlife species that depend on this kind of habitat — to study Kentucky’s report and take its lessons to heart.”

“We couldn’t be more pleased by the progress in the first five years of the plan’s implementation,” said John Morgan, small game program coordinator. “Tremendous teamwork by department staff and partners made what many believed to be impossible, possible. Our short-run goals were to establish proof-of-concept that habitat at the right scale can work, and to generate a feeling of hope among Kentuckians.  We think we accomplished those objectives, but we have a long way to go to restore bobwhite to meaningful levels across the Commonwealth. “

“Our charge going forward is to get involved, get inspired, and get dirty,” said Kentucky Department of Fish and Wildlife Resources Commissioner Gregory K. Johnson.  “You will find we have been very successful in areas where we focused on quail habitat creation, enhancement, and restoration on larger landscape scales,” said Johnson. “Nothing worth doing is ever easy; this is worth doing.”

Biologists say in the case of Livingston County they attempted to manage too much – 40,813 acres – as a focal area to be able to show quick results in just a five-year period with available resources. They have scaled the focus area down to 6,000 acres and made the remainder of the 40,813 acres the state’s first NBCI Bobwhite Focal Landscape.

Biologists say success of the Hart County area was tied directly to large-scale habitat improvement – nearly 3,000 of the 19,827-acres of the total focal area – brought about by landowner participation in the Conservation Reserve Enhancement Program (CREP), which makes annual payments to landowners who voluntarily retire acreage … and, in this case, destroyed non-native fescue grass and re-planted native grasses and wildflowers. Biologists say it’s the largest grasslands restoration in the state’s history.

The sixth of the state’s focal areas, the 14,416-acre Clay WMA Quail Focus Area, was not part of formal monitoring efforts during the first five years, but biologists say covey flush rates have jumped 300% since 2010.

The state’s full report can be viewed on NBCI’s website at  http://goo.gl/qqs6zr

Headquartered at the University of Tennessee Institute of Agriculture’s Department of Forestry, Wildlife and Fisheries, NBCI is an initiative of the National Bobwhite Technical Committee (NBTC) to elevate bobwhite quail recovery from an individual state-by-state proposition to a range-wide leadership endeavor. The committee is comprised of representatives of 25 state wildlife agencies, various academic research institutions and private conservation organizations. Support for NBCI is provided by the Federal Aid in Wildlife Restoration Program, state wildlife agencies, the University of Tennessee and Park Cities Quail.