The National Bobwhite Conservation Initiative (NBCI) is increasing its emphasis on the restoration of native grasses in pastures
and on range management with the recent hire of a new “grasslands coordinator” to work with resource managers and constituent groups at national and regional levels. 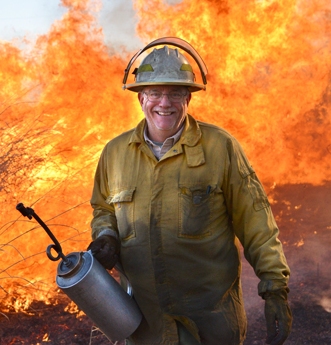 Jef Hodges, a Missouri-based wildlife biologist with experience in the commercial native plant seed market as well as years of experience in leading bobwhite habitat development across a broad section of the U.S., will work to build partnerships among the livestock industry, forage/range groups and extension agents to bring wildlife benefits that come with native plants back to agricultural operations. He will also build an information clearinghouse on native grasslands, grazing lands, and prescribed fire.

A certified wildlife biologist, Hodges has a B.S. in Fisheries and Wildlife from the University of Missouri and worked with the Missouri Department of Conservation in native grass restoration, as a plant manager and marketer with a native seed company in Missouri, as a regional director and biologist (covering Missouri, Kansas, Iowa, Nebraska, Minnesota and Wisconsin) with the former Quail Unlimited conservation group, and owner/manager of his own company, Total Resource Management, LLC. He is a certified technical service provider by the Natural Resources Conservation Service (NRCS), serves on the NRCS State Technical Committee in Missouri, the Missouri Prescribed Fire Council and is a member of the Quail and Upland Wildlife Federation, Quail Forever, the Conservation Federation of Missouri and the Quality Deer Management Association. He was Quail Unlimited’s Top Regional Director in 1996 and Employee of the Year in 2000.

“My job will be to work at regional and national levels to integrate native grasses back into forage-producing and other open grassland landscapes,” said Hodges, “while emphasizing not only the various environmental and wildlife benefits of doing so but also the direct financial benefits to producers.”

“There are roughly 120 million acres of ‘improved’ pasture land across the bobwhite’s range, where native grasses have been replaced with non-native, shallow-rooted, thatch grasses like fescue,” said NBCI Director Don McKenzie.  “Not only are these aggressive introduced forage grasses bad for wildlife, especially quail, they are vulnerable to weather extremes.  Many cattle producers faced economic catastrophe in the 2012 drought, a story that made headlines around the country when they couldn’t feed their cattle or had to buy expensive hay from out of state or even had to sell their herds. We believe if these producers had put just a third of their pasture operations in deep-rooted, drought-resistant native grasses they would have had a different experience. And that’s one of NBCI’s key objectives in our commitment to habitat-based restoration of wild bobwhites.”

Headquartered at the University of Tennessee Institute of Agriculture’s Department of Forestry, Wildlife and Fisheries, NBCI is an initiative of the National Bobwhite Technical Committee (NBTC) to elevate bobwhite quail recovery from an individual state-by-state proposition to a range-wide leadership endeavor. The committee is comprised of representatives of 25 state wildlife agencies, various academic research institutions and private conservation organizations. Financial support for NBCI is provided by the Federal Aid in Wildlife Restoration Program, state wildlife agencies, the University of Tennessee and Park Cities Quail. For more information, please visit www.bringbackbobwhites.org.