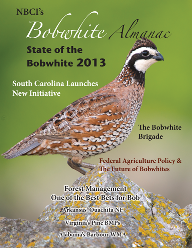 While the wild bobwhite quail population continues to struggle, the momentum to restore their populations range wide continues to grow with several important pieces falling into place over the last year, according to Don McKenzie, director of the National Bobwhite Conservation Initiative (NBCI).

In the new issue of NBCI’s Bobwhite Almanac, State of the Bobwhite 2013, McKenzie recounts the increasing number of active partnerships supporting habitat work, major donations to critical bobwhite support functions, the growing national coalition aimed at changing federal agriculture policy to benefit bobwhites and other grassland species, and NBCI’s official entry into the arena of mine reclamation for grasslands wildlife among other advancements.

South Carolina’s fall 2013 launch of a new initiative aimed at landscape-scale restoration of wild bobwhites is among several positive highlights for the species in the newest NBCI report. The Almanac details South Carolina’s upcoming push in 30 counties, aimed primarily at management activities on forested lands with the creation of forest/woodland savannas, and agricultural lands utilizing field borders and conversion of exotic grass pastures to native warm-season grasses.

The Almanac also examines the impact of federal agriculture policy on bobwhites, with NBCI Agriculture Policy Coordinator Kyle Brazil writing, “The continued existence of meaningful populations of bobwhites, as well as an entire suite of grassland birds, depends in large part on our ability to influence (federal) policy.

That policy has subsidized the planting of millions of acres of exotic grasses to the exclusion of native grasses and to the detriment of bobwhites and other grassland species. Integrating native grasses back into America’s pasturelands is one of NBCI’s major objectives in concert with other conservation groups.

“While we typically think of classic bobwhite habitat in an agricultural setting … our best habitat work on behalf of bobwhites will actually occur in the forested landscapes from New Jersey to Texas and Oklahoma to Florida,” contends Black. “Much of this is already occurring, often with very positive results for quail.”

The Almanac highlights examples of forest management that are increasing bobwhite populations, including shortleaf pine ecosystem restoration on the Ouachita National Forest in Arkansas and a similar project with longleaf pine on a wildlife management area in Alabama.

Also detailed in the Almanac is the effort by six states – Georgia, Iowa, Kentucky, Missouri, Texas and Virginia – to pilot NBCI model focal areas that will, for the first time, couple large-scale habitat management with collaborative monitoring. The new report is available for viewing at www.bringbackbobwhites.org, and printed copies are available for purchase at https://nbgi.org/donate-2/online-store.