TRENTON – The New Jersey Forest Fire Service is developing new guidelines for prescribed burning following the signing of legislation by Governor Phil Murphy providing the service with more tools to conduct these operations that are critical to protection of public safety and forest-health management. 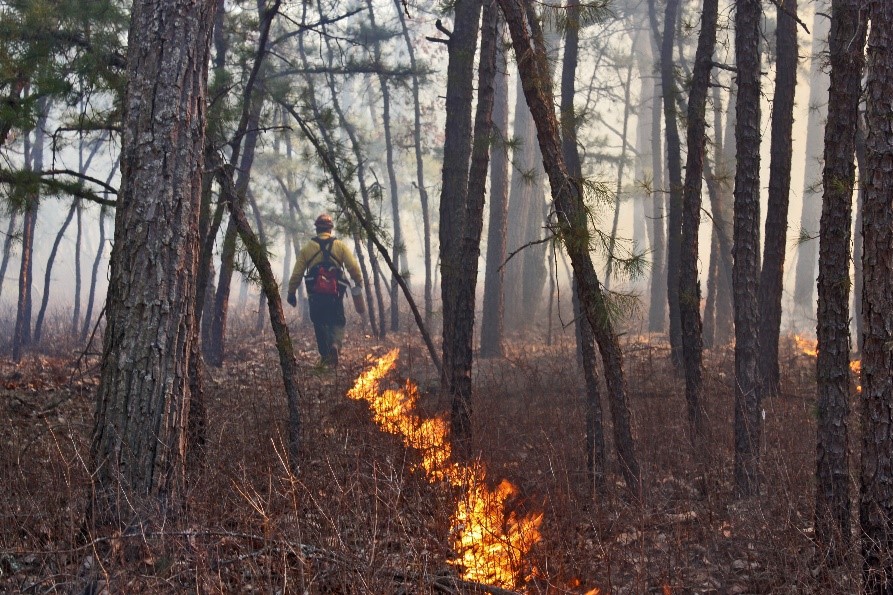 “The legislation the Governor signed last week provides the Forest Fire Service with more flexibility in determining the objectives of prescribed burns and provides clearer goals for owners of private property and nonprofits to utilize controlled burns to manage the health of ecosystems,” said Department of Environmental Protection Commissioner Catherine R. McCabe.

Every year, the New Jersey Forest Fire Service has a goal of setting prescribed burns on about 20,000 acres of state-owned and other lands. These burns, also known as controlled burns, can take place in both forested and grassland areas and are critical to reducing fuels such as leaves, pine needles, fallen trees and branches, and shrubs that can act as tinder, causing wildfires to become difficult to control. These burns also improve ecosystem health and diversity by removing competing and invasive plant and tree species and enhancing wildlife habitats.

Among the key components of the legislation is an expansion of the definition of burn objectives to specifically allow for controlled burns to achieve ecosystem diversity, such as creation of wildlife habitats, and not just as a tool to reduce hazardous fuels.

The Forest Fire Service worked closely with numerous stakeholders, including nonprofits, environmental organizations and outdoor sports organizations to help the Legislature craft the legislation, which passed unanimously in both houses. Governor Murphy signed the measure, A1675, into law on Aug. 24.

“New Jersey has long had a vigorous and strong prescribed burning program that is respected across the nation and is often studied by other wildland managers, scientists and firefighting agencies,” said State Firewarden Gregory McLaughlin. “This legislation will make the program even stronger and more effective. We plan to begin implementing many of the new measures in the next prescribed burning season.”

In New Jersey, the prescribed burning season typically takes place during the late fall into the late spring or early winter, depending on weather conditions. Operations are conducted at this time of year to take advantage of favorable weather conditions, such as lower relative humidity and cured fuels. These conditions are more conducive for managing burns so that they better consume targeted vegetation and debris.

Sometimes, however, extremely wet conditions during the prescribed burning season may limit the ability of the Forest Fire Service to achieve its acreage goal. The new law provides the Forest Fire Service more flexibility to conduct burning operations at other times of year when conditions are favorable to achieve other resource management objectives.

Nearly all wildfires in the state are caused by people, usually by accident, carelessness, recklessness and even arson. The Forest Fire Service must carefully weigh risks of fire suppression against the potential for wildfires to cause property damage and endanger lives. The best tools the Forest Fire Service has at its disposal are public education campaigns informing the public about wildfire safety and prescribed burning operations.

During prescribed burns, Forest Fire Service personnel use handheld torches to set smaller fires to burn away fallen leaves, pine needles, fallen branches and other debris on the forest floor. Personnel consider wind, moisture and other conditions in setting the fires.

Wildfires can have the greatest impact in areas where people live in or near forests, grasslands and other natural areas. The sprawling Pinelands region in southern New Jersey is especially prone to wildfires because its ecosystem is adapted to depend on periodic wildfires for releasing of seeds for reproduction. Controlling the buildup of fuel in this region helps keep the forests healthy.