Producing one to three million seeds per acre and remaining viable for what is thought to be up to 20 years in the soil, the seed rain alone creates an ever-abundant seed bank. Once established, plants will reduce or eliminate competing vegetation through shading, competition for water and nutrients and allelopathy. Introduced in 1896 at the North Carolina Agricultural Experiment Station to be tested as an agricultural crop, sericea lespedeza (Lespedeza cuneata) also known as Chinese lespedeza or Chinese bushclover, made its first recorded entry into the United States. In 1924, the US Department of Agriculture, using seed from Japan, planted it at the Arlington Experiment Farm in Virginia. Sericea lespedeza was commonly used for ground cover in mine reclamations and road construction particularly due to its adaptability to poor soil conditions. In the 1940’s USDA and many state agencies promoted sericea for forage, hay and wildlife food and cover. Reported in 2005, by C.A. Duncan, et al, Invasive plants of range and wildlands and their environmental, economic, and societal impacts, the estimated coverage of sericea lespedeza was 8.6 million acres in 2003. The authors also reported from a study site in Kansas that between the years 1989 – 2003, sericea had increased at a rate of 24% annually. I do not contend that the rate of increase is 24% annually range-wide, but it does demonstrate that sericea lespedeza has the capacity to overwhelm natural systems rapidly. Sericea is best adapted to areas of 30 inches of rainfall or greater and is tolerant of minimum temperatures down to -15◦ F. Figure 1 shows the approximate area of adaptation, though it is known to exist outside of the area indicated, however in limited distribution. 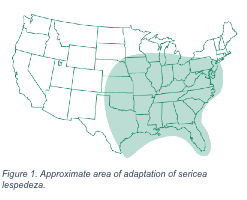 If you don’t have sericea your best strategy is to be diligent about scouting and treat it as soon as you see it. You can’t do much about the natural source of spread by animals, but be mindful of the human sources of spread. Cars, trucks, farm equipment all can capture seeds in the nooks and crannies then fall out to infest unoccupied areas. Mowing and haying equipment are particularly susceptible, miles and miles of highway rights of way have been contaminated by mowing after seed set. Thoroughly clean any equipment that has been in sericea infested fields. Pay attention to hay being hauled in, when buying, insist that it be sericea free. Don’t buy cattle from sericea infested pastures or farms. Seeds can be entangled in their coats and also pass through their systems to be deposited with manure.

When buying forage or habitat seed, relying on the seed tag analysis may not be enough. Depending upon what state you are in, sericea lespedeza may or may not be listed. It is a state noxious weed in Kansas and Colorado so it is required by law to be listed. Other states, under the “Weed Seed” section of the tag, may list it while in other states it may just be part of the percentage of unknown “Weed Seed” and unlisted. Also check the “Other Crop Seed” section of the tag as some seed companies commercially sell it. It is best to specifically ask if the seed vendor guarantees it to be free of sericea lespedeza seed. I would avoid buying native grass or other seed from any vendor who sells sericea lespedeza seed for fear of cross contamination.

If you have sericea lespedeza, controlling it is a challenge and a never-ending task. Even if you can eliminate established plants and seedlings, one study deduced that spring germinating seed may only represent 1% of the total soil-stored seeds. Based on that estimation, once you have it, you can plan on having it essentially forever.

Grazing – For the most part, livestock do not graze sericea due to its high tannin content, or it is among the least preferred so last to be grazed. The regrowth of sericea following a burn is palatable and grazed but quickly grows beyond palatability, likewise early emerging plants are grazed too, however if residual stems from the previous year persist, cattle are less likely to graze it. Some exceptions are in high stock density grazing systems, when cattle are forced to graze it – and may be a good strategy for management. Most studies report that sericea does not increase under grazing. Also, note that goats and sheep seem to do fine with sericea.

Mowing – Mowing during bloom does nothing to weaken the plant but it does prohibit it from going to seed, for the most part. Often, mowed plants will re-bloom and attempt to produce seed. If you have a late frost, they may produce viable seed. Mowing when carbohydrate reserves are low can help reduce vigor and annual mowing can reduce the stand, assuming you are also mowing during bloom to prevent seed-set. Lowest carbohydrate reserves are typically early-summer, after green up in spring. Continued mowing during the summer will continue to stress the plants and reduce their vigor.

Burning – Timing of prescribed fire has varying impacts on sericea lespedeza and can increase plant density and vigor. Spring burning stimulates sericea, which if done by itself is not a good strategy. Burning helps scarify seeds and stimulate germination, however if done in conjunction with other methods such as herbicide, grazing or mowing, can be effective. Burned plants are more palatable and burning removes residual stems which inhibit grazing. Because burning stimulates a flush of new seedlings, herbicide treatments following can help reduce the seed bank pressure while also eliminating established plants. The same principles for mowing following burning apply as listed above. Recent research conducted in the Great Plains have shown a reduction in sericea lespedeza with repeated annual growing season burns conducted when sericea is in peak bloom. It should be noted that successive burns may not be possible with heavy infestations of sericea due to lack of ground level fuel to carry the fire.

Hand weeding – Hand weeding is only effective for new seedlings. Established plants have a significant tap root and are next to impossible to pull out of the ground. Hand weeding would only apply to very minimal plant infestations on a very small scale due to the labor intensity.

Herbicide – Herbicide as a stand-alone practice is probably the most efficient but it has its drawbacks. Herbicides that are specific to sericea lespedeza do not exist. The common and less expensive broadleaf herbicides, (2,4-D, dicamba, picloram) are not effective. Glyphosate can be used but is not recommended because it is non-selective. Triclopyr, metsulfuron and triclopyr plus fluroxypyr are the most effective and cost efficient, but still expect chemical cost to be between the upper teens to low twenties per acre. All three have slightly different specifics about their use in relation to their rate and timing of application. In many cases broadcast applications are not desirable due to the presence of other favorable forbs and off-target damage, while spot applications are more targeted they can also result in off-target damage and are more time consuming. Broadcast applications are best suited for heavy infestations or in stands without forbs. Spot application works well for scattered plants or where other sensitive, desirable plants occur such as remnant prairie or in pollinator plantings.

An integrated approach to sericea suppression provides the best results. Combining burning with grazing, mowing or herbicides significantly reduces the population. In organic systems, burning with grazing and/or mowing can provide acceptable results.

Get mad, no, get angry at sericea lespedeza and attack it with a vengeance and don’t let up. It certainly isn’t going to let up on its invasion. Heinous invader.

The Native Grass Gazette’s purpose is to promote native vegetation, its wise management and role in our environment and society, and pass along news of happenings in the native grass/prescribed fire world. I’ll be posting a variety of information here related to grasslands and grazing. Many of my posts will be opinion and editorial, some anecdotal, while others will be scientific. I will use this blog to share links to relevant topics and as an avenue to disseminate both new and old information related to native vegetation, meeting announcements, etc.

Some blog posts will be lengthy and others not much more than a link or announcement. I hope you will find it entertaining, useful, educational or enjoyable – better yet, all four. I encourage you to subscribe and share, also feel free to share with me any news, events, research, etc. that you think may be of interest to like-minded people.

Keep the tall grasses growing and burn on!