I was talking with a colleague this morning discussing youth hunter recruitment and how difficult it is given all the things kids and their parents are now involved in. Just to get a commitment for a one day hunt, or even part of a day, is difficult. Where does that hunting spark come from? What makes a kid burn with desire to go afield? I know when I was a kid some of my earliest memories were of my dad returning home with game. I can still vividly picture a big greenhead mallard he pressed into the window of our front door, when I was four or five, as I gazed at it in awe. But it was more than that, and exactly what I am not sure.

Regardless whether your kid ever hunts or fishes, I hope you somehow manage to kindle their interest in the outdoors. Without that basic curiosity towards nature, there is little likelihood a child will ever grow into a conservationist. I hope you help your kid find a way to rediscover discovery. You just might have fun yourself.

My daughter and I have worked together on her school science project now for the past 3 years. As we scanned the internet looking at page after page of age appropriate science projects for this year’s assignment, nothing really spoke to us. Last year we did the “floating egg” experiment, where we tested the buoyancy of water. As we added salt, low-and-behold the egg that sank in freshwater now floated. Her thoughts may have been, “OK Dad, my choices for fun are, play cool video games, or watch an egg float in water.” One of the biggest challenges any parent faces is how to make things productive, but also fun.

I gave up on the internet projects this year. I put my own meager brain to use. What might be easy, involve nature and 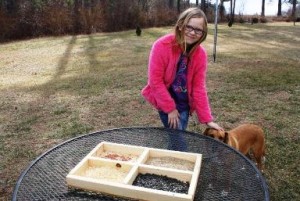 be fun? “What do you think about testing to see which seeds in a bag of store bought bird food the birds actually prefer?” I asked Grace.  She thought it was “cool.” Most store bought bird seed is comprised of millet, milo, sunflower and cracked corn. Some contain wheat, barley, or a few other seeds, but your standard bag of bird seed is not a sack of gourmet bird food.

Daddy’s bright idea was to get a sifter and separate the seeds…which did not work at all, and we had a ton of fun laughing at my stupidity. I ended up buying the four basic seed types separately. We then had a great time building a 4-chambered tray to put the different seeds in. Nothing hi-tech, we use plywood and some 1’ x 2” stripping pine to make our testing device.

My daughter, wife and daughter’s science teacher all had worries about “how will you know whether squirrels ate the seed? How will you control for seed being blown out by wind? Will you weigh the seed each morning and evening, etc.?” I explained to them all – this is an observational experiment. It will require Grace to sit and watch the birds feed during peak feeding times and record what seed they choose. Thus Daddy is not as stupid as many would like to believe (though my life does have a Forrest Gump quality).

I actively involved my daughter in observing birds. At the same time I eliminated all the potential biases associated with a non-observational experiment. If a squirrel comes along, we’ll shoo him away. And we won’t worry about times, if Grace watches for 10, 20 or 30 minutes over several days – it does not matter because in the end we will have the total number of each variety of seed chosen by type of bird, and collectively.

Some of our results: sunflower was chosen 286 times, millet 26 times, milo 23 times and cracked corn 27 times. The most common choosers of sunflower were the tufted titmouse and the chickadee. We can unequivocally say tufted titmice and chickadees prefer sunflower. Juncos fed on the ground almost exclusively and visited the tray only 2 or 3 times. Doves also fed exclusively on the ground. Cardinals preferred to feed from our bird feeder which was close by, but began to visit the tray once they got used to it. The towhees were the last to show up. They only began using the feed we put out after it snowed. We also found that Cardinals eat sunflower seed by taking the entire seed inside their bill, then spitting out the hulls, but the chickadees and titmice have to grasp the sunflower with their feet and peck out the seed inside. Thus cardinals can eat sunflower a lot faster than other birds. Interesting also was that blue jays, while a large bird, do not have a beak adapted to take in the seed like a cardinal. They, too, had to hold the sunflower seeds and peck them open. The chickadees would pick the seed up and fly to a nearby tree to eat it. The titmice would as often as not, simply peck it open right on the edge of the tray – all this from one simple experiment.

Seed for further study…we wondered how far away birds would come to a feeder? We observed them flying in from a distance of well over a hundred yards. Maybe this study has been done? Regardless, I hope I sparked in my daughter the seeds of a conservationist. Today, songbirds, tomorrow, who knows? But it has to start somewhere.