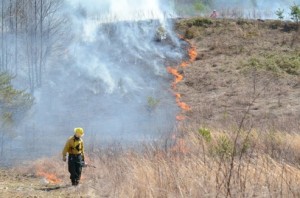 There is a primordial link that modern humans cannot escape when we stand near the ocean and look at its vastness and taste the salty sea breezes. Likewise, I feel that same connection when sitting near a campfire. There’s just something about fire and smoke … and the visions and memories they evoke. Transcending time, apparitions of faces, echoes of voices telling stories all rise like the smoke, then waft away quickly on the evening breeze. I can see friends in the flames appearing as they looked 25 years ago.

I built a nice big fire ring in the northern portion of my backyard out of “found” rocks. I don’t have to camp to have a fire now. I feel no guilt in burning wood I cut with my own hands from time-to-time for the sheer joy of it. As I sat by the fire a few nights back, I watched the small pile of wood I brought up from the barn disappear rapidly. The colder it got the more I poured on the red oak. Within three hours what I thought would have lasted most of the night was nearly gone (and so was the drink I sipped on).

Much as I try to forget work on weekends, a bobwhite quail flew up out of the fire and into my thoughts. In the east, the father of modern quail management Herbert Stoddard called the bobwhite the “fire bird” in his classic “The Bobwhite Quail: Its Habits, Preservation and Increase” back in the late 1920s. It has been postulated to me by several biologists over the past year that perhaps we were working very hard to restore bobwhite quail to a landscape where they were never abundant pre-European settlement. After all, the tendency in the east for land left to its own devices is to become mature forest.

I agreed to a point with these colleagues, but as I sat by my fire I imagined Native American villages, perhaps consisting of dozens, sometimes hundreds and occasionally maybe thousands of humans living in one area and depending on the resources in their immediate surroundings. Those people not only needed fire to stay warm in winter, they used fire to cook with routinely, daily almost. Fire was also used in canoe making, land clearing, preparing land for farming and promoting ample game populations. When I looked at how much wood I had used to stay moderately warm for a few hours it struck me that Native Americans must have used vast quantities of wood in the areas in which they lived. And fire must have been as common a daily tool for them as a microwave oven is to us.

I further imagined their imprint on the landscape. It was not benign. As they exhausted resources in one area over a period of years, they were likely forced to move to new areas and begin the process again. I am not an archaeologist, but I have read quite a bit about this, and what I am describing is well documented in various places. The notion that there was an unbroken, mature forest from the Atlantic Ocean to the Mississippi River is somewhat misleading. And, while I believe quail populations peaked in our state shortly after the Civil War, I do believe they were abundant well before that. When you add to the Native American use of fire, lightning struck fire, and also toss in large grazing animals like elk and buffalo, I believe early-succession habitats were common.

Tying this back to my title, beyond the bonfire ring, I imagine a ring of fires influence across wide areas of our eastern landscape. Early-successional habitats were perhaps not as evident here as they would have been in our mid-western prairies, or in the Texas scrublands, but they were critical components of our eastern ecosystems. Vast acreages of fire-dependent long-leaf pine existed with significant acres occurring in Virginia. Piedmont prairies, and open mixed short-leaf pine and oak woodlands were common throughout central Virginia. Large open lands occurred west of the Blue Ridge in extensive, fertile valleys and on mountain “balds” maintained by lightning struck fire and grazing.  And southwestern facing mountain ridges burned frequently, keeping them in a successional sere dominated by open stands of fire adapted pine. These habitats were important then and they are important now. Until Virginia’s landowners, public and private, learn to recognize, appreciate and manage these sometimes “scruffy” looking habitats, our state’s biodiversity will continue to decline.

However, there is good news. A culture of prescribed burning for ecosystem management is beginning to emerge again among many agencies and among several non-governmental organizations in our state. This has not occurred by accident. Many dedicated professionals in both the public and private sector have worked hard to reignite (don’t groan out loud or roll your eyes) and fan the flames of interest in prescribed fire. So next time you see smoke in the air, don’t assume the worst. There is still a place on Virginia’s landscape for properly applied fire and the habitats it produces.