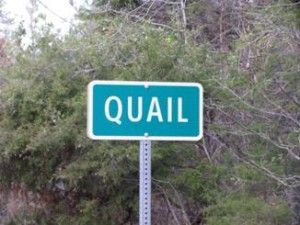 I left my house at 4:15 this morning to go out to do what hundreds of biologists do for dozens of species every year –

conduct wildlife surveys and monitor their populations.Invariably I’ll have at least one or two people stop and ask me what I am doing. When I tell them they almost always reply “Man, what a cool job, you got it made” and then drive off. Hard to argue with that most of the time…unless you factor in the stress that comes from trying to bring back an entire species across land areas measured in hundreds of thousands of square miles. Especially if you really care about these little chicken-like birds we call bobwhites.

As I drove around today between stops I could not help but to think a little bit about what those soldiers, airmen and sailors were thinking about 70 years ago when they got up at 3:30 to run headlong into danger. Today of course is the 70th anniversary of D-Day. I also wondered what would they think of what I was doing? Would they think that anything I ever did was worth risking their life for?

Truth is most of them were scared young kids who were not thinking of anything other than whether they’d survive the day, and then the next day, and then the one after that. Soldiers will tell you when the chips are down they don’t fight for God or country, but for each other. One other thing they’ll tell you – those lucky enough to survive that is, that upon returning to this world, it was the simple things they found they loved the most. An ice cream cone on a Sunday afternoon after Church, watching a Little League baseball game after work, the simple pleasure of driving a car, in a free country, on roads that belonged to everyone, and I’d be willing to bet, the simple whistle of a male bobwhite on a clear June morning.

On this 70th anniversary of D-Day, I am glad I live in a country where plenty of people still care about the environment and our surroundings; and not simply care about what is here today, but what will be here for their kids on the 100th anniversary of D-Day, and the 200th. I am also glad that even though we do not always agree about how to conserve resources, we all agree we should be free to argue about it, even with our government, without fear of being purged, imprisoned or eliminated.

I heard nine bobwhites singing this morning, along with many indigo buntings, field sparrows, prairie warblers, and even two grass hopper sparrows. My reports will be but one speck of data in an ocean of it that collectively allows us to make informed decisions about species management. But to me, those bobwhite calls are a part of my heritage and something I love. Something I also believe to be part of the thousands of American fibers that form the fabric that collectively makes up our way of free life … and worth dying for.