Shell’s Covert: An Appeal for Support of NBCI 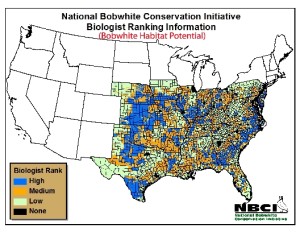 I am writing this during the season of Thanksgiving and celebration. I am thankful for so many things, family, job, the ability to live in a free country and practice the religion of my choice, my right to keep and bear firearms, my access to millions of acres of public lands managed in trust for all of us, an open society where we can criticize our leaders without fear of retaliation, and a strong military which allows us to keep all these things – the list goes on.

I am also thankful we have a National Bobwhite Conservation Initiative and an NBCI staff. As Chair of the National Bobwhite Technical Committee’s Steering Committee, I have been intimately involved in the discussions regarding state use of a small portion of windfall Pittman-Robertson (Federal Aid in Wildlife Restoration dollars- excise taxes on firearms and ammunition) funds to provide increased support for NBCI staff in the short term. I have been involved with the NBTC and the NBCI since only a few years after their inception in1995 (my involvement began in 1997). I have seen the group grow from a relatively small, southeastern-based Southeast Quail Study Group, to a 25-state range-wide entity (NBTC) with a parallel core group of “quail dedicated” staff (NBCI) – currently at very little cost to the states, and no cost for some. No growth comes without pain, trial and error and soul searching.

I think we are at a crossroads for bobwhite recovery and the next 3 to 5 years will be pivotal for bobwhite conservation.

When we moved to enlarge the SEQSG to become the 25-state NBTC I guess we knew that perhaps not all states would be fully on board. I understand that and I want to say in advance, whether a state is on board with NBCI or not, I appreciate their dedicated field staff and all they do on behalf of quail and so many other species every year. I will also say that we should appreciate good quail work whether it is done under the flag of NBCI or not.

But I also believe that if we could all work together under the umbrella of NBCI, we could be more effective nationally and within our own states. With regard to current NBCI staff funding, with the exception of Director Don McKenzie, they have been funded largely by annual grants from the National Fish and Wildlife Foundation (NFWF) or the Multistate Conservation Grant Program. So every year NBCI staff not only has the fear of a short-term funded job hanging over their heads, they also have to work hard to find funding for subsequent years. This obviously detracts from their effectiveness – though they have been remarkably effective in-spite of this, in my opinion.

Our recent plea to states has been to request for a 3-year period significant use of Pittman-Robertson (P-R) funds to support NBCI staff. The intention is to allow the NBCI staff time and resources to thrive and reach their potential value and productivity, without having to spend inordinate time annually looking for money.

Simultaneously, the Bobwhite Foundation, an entity designed to eventually provide private funding through an endowment to support NBCI Staff and operations long term, would have those years to organize and develop a funding base to offset the need for annual grant writing. The amounts per state if all 25 participated would range from $20,000 to maybe as much as $75,000 annually, based on a state’s proportion of received P-R dollars. These amounts are significant to you and me, and should not be sneezed at, but as a portion of a given state agency’s annual budget, represent a very low percentage.

Well, first why do all this? Can’t each state manage its own quail recovery without NBCI?

At the risk of sounding ungrateful for all that state agencies do –and it is a ton – our record over the last 25-40 years with quail recovery is not great. This is not for a lack of trying. Many states have labored valiantly and had some successes along the way. But large scale success has been limited.

But when you compare us to “the duck folks” who have a National Wetlands Conservation Act, the federal Duck Stamp and a federal agency with significant portions of its resources dedicated to their recovery – (not to mention a very effective NGO in Ducks Unlimited) it’s not hard to see why they have had more success. There are other factors involved, but the bottom-line is – states need help.

I would argue that all NBCI is trying to do is to be that umbrella group that develops momentum at the national level for quail recovery. Much like Ducks Unlimited worked along side the U.S. Fish and Wildlife Service and state agencies, the quail NGOs (Quail Coalition, Quail Forever, Quail and Upland Wildlife Federation, the National Wild Turkey Federation and more) work alongside NBCI, NBTC and state and federal agencies. NBCI is not trying to usurp anyone’s power or ability to do what they do. Rather they hope to become the force multiplier for quail recovery. The eventual goal is for NBCI to become a “giver to states” not a “requester of state funds.” But if this effort dies on the vine before that can happen – in my opinion one of the greatest opportunities for quail and early-succession wildlife in our lifetime will be lost.

Right now many states are supportive whole hog and they see the long term benefits of a strong NBCI. Our quail NGOs are also supportive and also careful to help NBCI see its role and stay within it. But some state agencies are not sold on the idea yet. And I understand where they are coming from – money is crucial to many of their programs and they do not yet believe their return on investment in NBCI will be high enough to justify the cost. It seems some states are saying “show us the results and we’ll show you the money,” and NBCI says “show us the money and we’ll show you the results.”

I personally believe in NBCI. A saying our agency senior staff uses quite often when field staff are too quick to criticize management decisions is “assume good intent” meaning “please do not be too quick to judge managers as having some subversive agenda – we have your best interests at heart.” I assume good intent from NBCI. Having known these people for years, some of them for over 20 years, I only see that they are struggling with how to do what is best for bobwhite quail range-wide…and without any authority at all.

Leadership is best defined as “the ability to get things done without any authority at all.” And that is why great leadership is one of the hardest things to achieve in life. NBCI is trying to provide great national leadership for bobwhite recovery and I for one hope states will embrace the P-R funding concept and give the NBCI a chance to show us what they can do. If the NBCI ultimately fails, I’d rather the states have first provided NBCI a real fighting chance to succeed than deny it a meaningful chance to try.

I caveat all this by saying I have worked for a great state agency (VDGIF) for almost 18 years and recognize how many issues they all face, with quail recovery being just one of hundreds. For this reason, as much as any other, this is why I believe we need NBCI.