The Undignified Death of Weeds 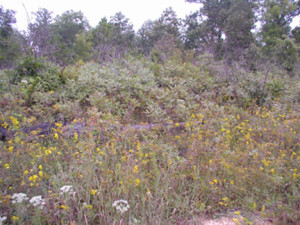 Maybe you recall the movie “Unforgiven.” It has become a classic, and it earned awards for star (and director?) Clint Eastwood –

Best Picture among them. In one memorable scene near the movie’s end, Gene Hackman’s character “Little Bill” lays dying, but still defiant, on the floor. Clint stands over him with Morgan Freeman’s Sharps rifle cocked. Little Bill says “I don’t deserve to die like this.” To which Clint replies, just before finishing him, “Deserving’s got nothin to do with it.”

Maybe it is quite a leap to relate this back to quail management, but at least I got your attention. It made me think of the undignified deaths of so many plants deemed “weeds” by the masses of “lawn-like landscape” lovers out there. So many “weeds” die an undeserved death by bush-hog or broad-spectrum herbicide at the hands of landowners bent on wasting $4.00 dollar a gallon diesel fuel in fighting an ill-conceived war with Mother Nature.

As wildlife professionals, we have been ineffective in educating the public as to the value of “weeds” and “brush.” Think about this, “A weed by any other name may be a Rose.” A poor twist on Shakespeare, no doubt, but the point is – many of the things people call weeds, are in fact valuable wildflowers, grasses and shrubs. They do not deserve to die “undignified” deaths at the hands of uneducated, mis-informed – though perhaps even well meaning landowners.

If you have worked as a wildlife biologist in the field of private lands management, you have undoubtedly heard the following: “Marc, I got that old field cleaned up; I was in there all week with the dozer and bush hog. I have it down to bare dirt. What do I need to plant for quail?”

I find that the “food plot” mentality still prevails in some cases, more than two decades into what I call the “modern era” of quail management. We have simply failed in spreading the word about proper habitat management for promoting early-succession species like bobwhites.

One of the biggest challenges in working with landowners is to first help them recognize the good habitats they already have. Indeed, there are times when setting things back to “ground zero” may be necessary, and soil disturbance in the form of disking, or prescribed fire is a big part of quail management. But it must be done with some degree of discretion and knowledge of proper application.

What can you do as a quail enthusiast? First – learn. Educate yourself about the hundreds of plants many collectively call “weeds.” Knowing something by name automatically elevates a person’s appreciation of it. Briers become blackberry, greenbrier and raspberry thickets. Brush becomes wild plum, sumac and elderberry “coverts.” Weedy fields evolve into ironweed, Joe-pye weed, goldenrod, Maxamillion sunflower, beggar-weed, wild bean, sweet pea, and native grass “meadows.” Then – share your knowledge with a neighbor. We have become such a society of “texters.” We stand in line at the grocery store, right next to fellow citizens of planet earth, texting someone half a county away, when it has been months since we walked over to our neighbors house and said “hello, how are you, and by-the-way – I’m leaving this habitat along my field edge for a reason.”

Then learn how to properly apply prescribed fire, rotational disking and, yes, in some cases, selective herbicides to promote healthy, early-succession plant communities. They are indeed a highly valuable component of the landscape. But until these transitional plant communities are recognized by the masses as being valuable, they are destined to continue to undeservedly disappear from our lives. I am “preaching to the choir.” It is your responsibility to go out and preach to those who may not even recognize the hymn book.

And while you are out there, maybe also take the time to thank a military veteran, or an active duty Air Force, Army, Coast Guard, Marine, National Guard or Navy person for their service.